Architecture and the Public World 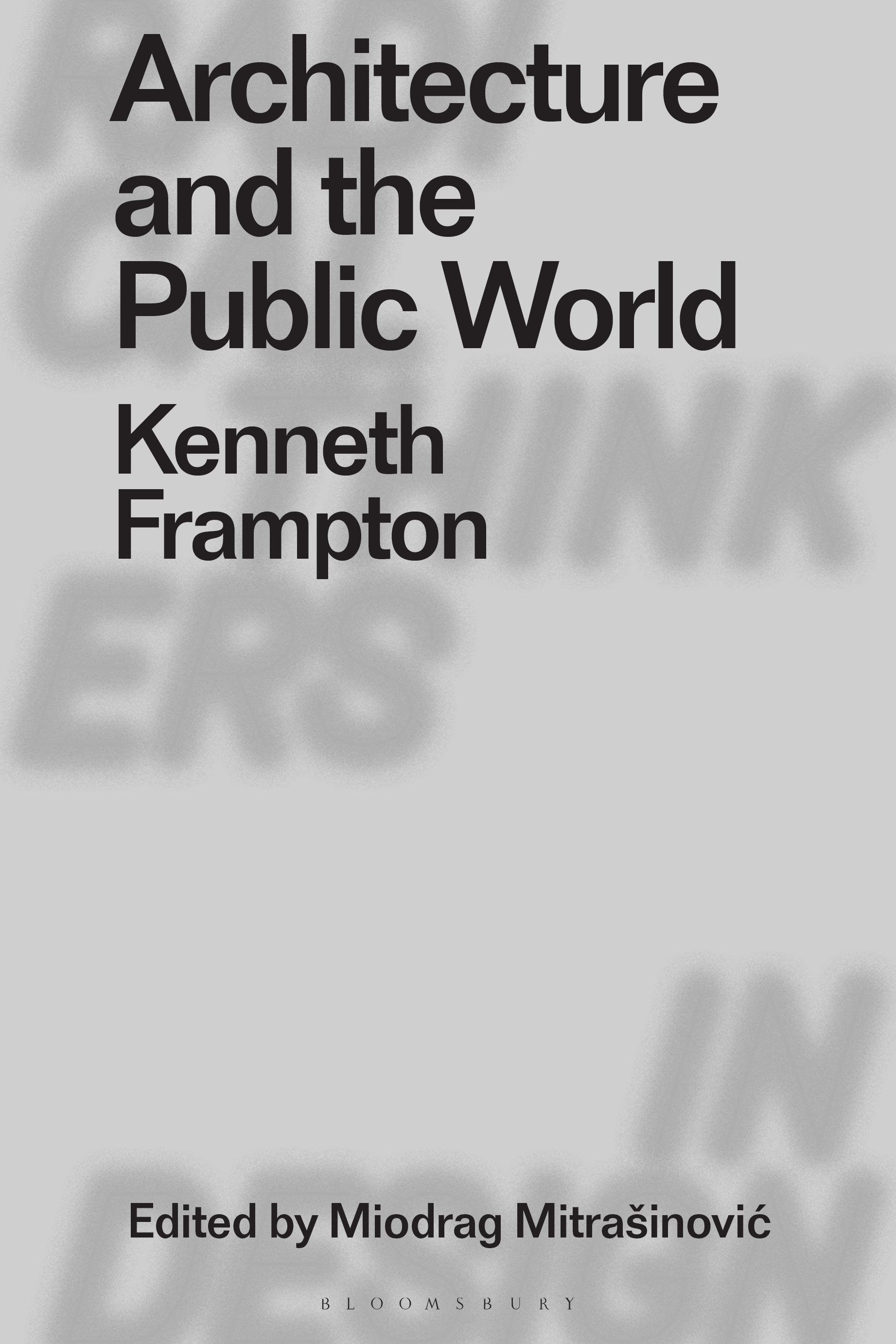 This volume of selected essays is both timely and necessary. Frampton is without question the most influential historian and critic of Modern and contemporary architecture in the world today. Though often written to address issues in earlier eras, the critical import of Frampton’s essays—if anything even more relevant today, and yet they are not available in an accessible format for university students and other readers coming to Frampton for the first time, nor do they allow the wider social, critical and historical force of Frampton’s work to be seen by those of outside of architecture. Covering a wide range of topics and areas—history and critical theory, critical modes, urban issues, and tectonics and critical resistance—he essays selected for the volume are well balanced as a group while also working together to reinforce and strengthen the overall understanding of Frampton’s cultural and political criticism and historical revelations, and its interrelated and integrated character. Together they provide both an overview of Frampton’s definitive theoretical and critical statements and they offer models of remarkable critical acuity and historical force.

This book is designed to redress this balance. Taking up examples of Frampton’s historical and critical essays across his career (beginning in 1965) and organizing these under four headings — History and Critical Theory, Modes of Historical Criticism, The Vicissitudes of Urban Form and Tactility, Tectonics, Resistance—the book focuses on the manner of how Frampton explores the specificity of architectural and urban configurations but does so in the context of pointing to the degree to which the formal and experiential analyses are conducted in and through their wider historical, cultural and political contexts—therefore illuminating, in distinctive ways that can only to be seen in and through complex configurations, the active engagement of architects and urban designers with the political, economic and technological circumstances in which they act at once critically and affirmatively. The immanent moment of his historical studies is the labor, political and social implications and causation of work—a point that becomes most apparent in his essays on urban form but which is actually present as a comprehension of history and historical understanding in the wide sense across all of his work. It is this restoration of the role of the interaction between critical analysis and historical understanding that is a key motivation for the book.

Kenneth Frampton was born in 1930 in Britain and trained at the Architectural Association School of Architecture in London. Until his recent retirement he was Ware Professor of Architecture at Columbia University. One of the world’s leading historians and critics of modern architecture, he is the author of Modern Architecture: A Critical History (1980), now in its 5th edition, 2020) numerous monographs and studies of leading modern architects and four volumes of historical and critical studies in modern architecture: Studies in Tectonic Culture: The Poetics of Construction (1995); Labor, Work & Architecture (2002); Genealogy of Modern Architecture: Comparative Critical Analysis of Built Form (2014) and the forthcoming The Other Modern Movement (Yale, 2021). A co-founding editor of Oppositions (1973-1984) his essays, seminars, lectures and critical writings span almost 60 years. He is the recipient of numerous honors and awards including the Golden Lion for Lifetime Achievement from the Venice Biennale of Architecture (2018) and the Soane Medal (2019).

Miodrag Mitrašinović is a Professor of Urbanism and Architecture at Parsons School of Design, The New School, New York. His books include The Public Space Reader (Routledge 2021), Concurrent Urbanities: Designing Infrastructures of Inclusion (Routledge 2016), and Travel, Space, Architecture (Routledge 2009).